History of the Yeadon Public Library 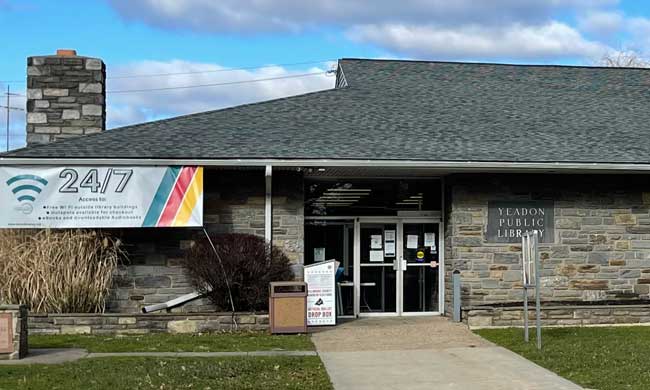 The Yeadon Public Library was founded by the Women Club of Yeadon in October 1937. Yeadon Borough of Council provided the facilities, a room located on the third floor of the Borough Hall. The Club stocked and staffed the library and assumed complete responsibility for its operation until the task became too great. In January 1939, the Borough Council assumed full responsibility. They created a seven member Library Board and a Librarian was hired. Over the years, the collection grew to approximately 8,000 titles and service hours expanded.

In 1966, Borough Council asked the voters in the May Primary to decide whether or not to build a Library building.  The voters approved and the Yeadon School Board cooperated by donating the building site. The Borough Council, the Library Board and Gilles J. Hughes, Architect, worked as a team in planning the new building and facilities. The Library was made possible primarily through Borough funds and funds granted under the Federal Library Services and Construction Act. The Yeadon Public Library building was dedicated on December 16, 1967.

As the titles and services grew in the 20th Century, many discussions took place by various Councils and Library Boards. Discussion and planning continued well into the 21st Century. In 2013, as a result of funds available from a capital campaign sponsored by the Yeadon Public Library, the Board of Trustees was able to pursue the plan to expand the Yeadon Public Library due to meet the needs of our growing community, and to accommodate our patrons with the technology of the 21st Century.

In 2014, the plans were implemented with LINN Architect and Anthony Bianco, builders to include a Community Room, Technology/Media Room, and a new Director’s Office. With the cooperation of the Yeadon Board of Council, residents and the business community, the new expansion became possible and was dedicated on September 14, 2014.

The Yeadon Public Library continues to provide library materials and services to meet the needs of Yeadon Borough residents. The library currently has a collection of approximately 50,000 cataloged items.